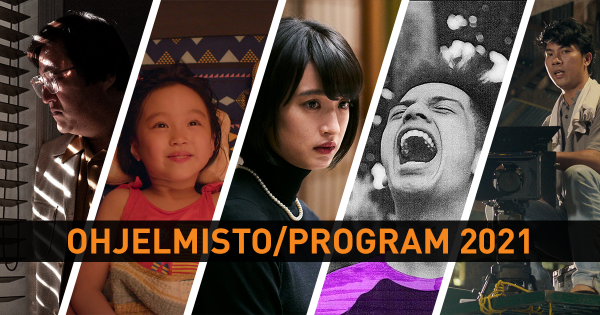 It is time to reveal the full program of this year’s festival which will be held online due to the ongoing pandemic and restrictions.This time Helsinki Cine Aasia offers 12 new and intriguing films from Japan, South Korea, China, Philippines, Malaysia, Burma and Cambodia.

Films about cinema
Filmmakers and filmmaking are a big part of this years festival. Just like Sono Sion’s Red Post on Escher Street (2002), Striding into the Wind (2020) by Wei Shujun, which was part of the Cannes selection, and Money Has Four Legs (2020) by Maung Sun uses filmmaking as a driving force of their stories. Striding into the Wind follows an aimless film student trying to find imaginary freedom on a film shooting trip to Inner Mongolia. Money Has Four Legs comes from Burma and follows a young director Wai Bhone making a revised version of a classic local film. The film draws a satirical picture of filmmaking and the state of the Burmese society in the year 2020, the 100th anniversary of Burmese cinema, unfortunately just shortly before the new military coup in February 2021.

Female directors’ perspectives
Ohku Akiko’s Hold Me Back (2020), Sode Yukiko’s Aristocrats (2020) and Yoon Ga-eun’s The House of Us (2020) are all directed by women. Hold Me Back is a romantic comedy about the relationship problems in the life of a female office worker. Aristocrats contrasts a woman from Japans upper skeletons with a countryside girls efforts to make it. South Korean film The House of Us show us a friendship of Hana and the two sisters Yoo-mi and Yoo-jin over the summer which offers comradery, warmth and adventure, but also challenges that the children can only do their best to solve.

Check out the full program HERE!

All film have English subtitles and they are only available in Finland.

The online festival will be held from Friday April 16th until Sunday April 18th at Festhhome.
Ticket sale starts on Wednesday April 7th.