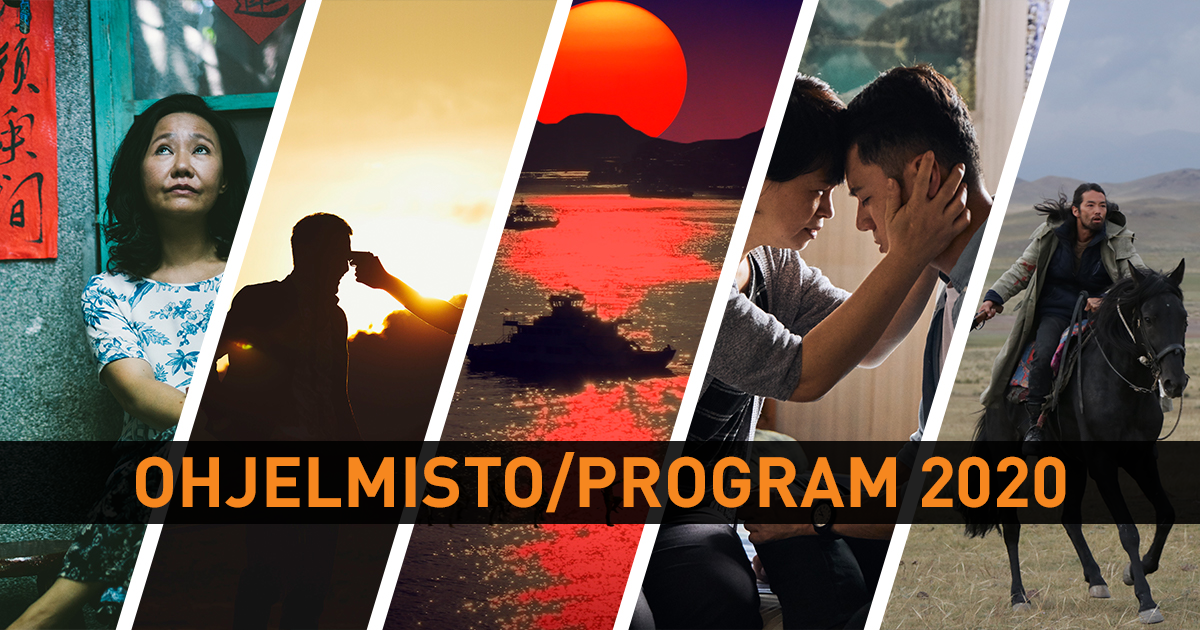 Helsinki Cine Aasia’s programme is out!

This year the festival hosts the Finnish premiere of 18 films from eight East and Southeast Asian countries. In addition, a series of classic films based on traditional East Asian theater is screened at Kino Regina. Helsinki Cine Aasia takes place at Korjaamo, Kino Regina and Cinema Orion from Thursday March 12 to Sunday March 15, 2020.

Helsinki Cine Aasia 2020 opens with the Tibetan film Balloon (Qi qiu, 2019). The latest film from Tibet’s best-known filmmaker Pema Tseden has already won accolades at several film festivals, including Venice and Chicago, as well as the main prize at Tokyo FILMeX. Set in Tibet in the 1980’s during the one-child policy, the warm-hearted and slightly humorous film illustrates the difficulties of combining the traditional with the modern. A Buddhist couple raising a herd of sheep and three children is forced to navigate between human nature, spirituality, politics and free will.

Pema Tseden’s earlier film, road movie Jinpa (Zhuang si le yi zhi yang, 2018) is also included in the festival program. Awarded best script at the Venice International Film Festival and produced by Wong Kar-wai, the film is a mixture of mysticism, black comedy and fascinating mountain scenery. Also set in the steppes of Central Asia is the Kazakh-Japanese film The Horse Thieves. Roads of Time (Orujasu no shiroi uma, 2019). Yerlan Nurmukhambetov and Lisa Takeba’s film, told from the point of view of a 12-year-old boy, is a story from the vast landscapes of the East with the classic elements of a Western.

The festival’s guest of honor this year is the Japanese director Amano Chihiro. She will present her new film Mrs. Noisy (Misesu Noijii, 2019), a humane and very current tragicomedy. A small dispute between a writer and her new neighbor escalates into a social media sensation that has unexpected consequences in the lives of both women. The topical film indicates that truth can be wavering under an avalanche of ruthless online scrutiny.

Also taking a stand on the hectic modern life is Omori Tatsushi’s serene and elegant Every Day a Good Day (Nichinichi kore kojitsu, 2018), a story about the art of traditional Japanese tea ceremony and the spiritual strength it gives young Noriko in the ups and downs of her life. Her teacher is portrayed by Kiki Kirin (e.g. Shoplifters, 2018) in one of her final performances. The art of Japanese tea ceremony, chado, and its philosophy is also discussed during the festival with Jouni Elomaa, the founder an honorary president of the Chado Urasenke Tankokai society (in Finnish).

Filmmaking and inspiration from art

Labyrinth of Cinema (Umibe no Eigakan – Kinema no Tamatebako, 2019) is the latest film from Obayashi Nobuhiko who has been making films for sixty years. It’s a pacifistic and imaginative epic that literally immerses its protagonists into history – and viewers too. While watching old war films at a movie theater that’s about to close, young movie-fans end up on the screen, experiencing the battles of different Japanese wars from the samurai era onward while the films depicting them evolve simultaneously, showing the history of Japanese cinema from the early benshi silents to modern day aesthetics.

Starring in Murahashi Naoki’s tragicomic mockumentary Extro (Ekisutoro, 2019) are the people who usually stay anonymously in the background: the extras. Warp Station Edo, a regular set for samurai dramas, is full of hassle with a fictional profile of a seasoned, hapless extra, a crime story involving police undercover tactics and a series of cameo appearances from well-known real-life figures such as Obayashi Nobuhiko himself thrown into the mix.

Filmmaking also plays a role in Krabi, 2562 (2019), Anocha Suwichakornpong and Ben Rivers’s unique film combining documentary and fiction. The stylized mosaic explores the multiple layers of Thailand’s scenic beach paradise in surprising dimensions. Tourism in Thailand and the local people’s views on the phenomenon are explored in a conversation arranged during the festival with Vanitsri Tirkkonen from The Finnish Thai Association and Timo Kuronen from the Siemenpuu Foundation.

Representing best new Chinese cinema is Dwelling in the Fuchun Mountains (Chun jiang shui nuan, 2019). The film, which premiered at Cannes, tells the story of four brothers in the midst of change. Gu Xiaogang’s debut is like a modern version of the 14th-century scroll painting by Huang Gongwang it gets its name and inspiration from: a slowly unfolding work of art, set in beautiful riverside scenery. The festival also hosts a discussion on landscape in Chinese art with artist Pan Jianfeng.

Many films in this year’s selection set in the modern world deal with searching for a connection with other people. In Taiwanese Ming-Lang Chen’s The Teacher (Wo de linghun shi ai zuo de, 2019), a young teacher tries to activate his students to participate in social activism while campaigning for equal marriage rights in his spare time. Complicating his affair with an older man are external pressures and prejudices. Taiwan was the first Asian country to pass the law on same-sex marriage in 2019. The current status of sexual minorities in Taiwan and mainland China is the topic of an after-screening discussion hosted by Helsinki Cine Aasia and the Finland China Society featuring Sami Huttunen, who has researched religion and homosexuality in Taiwan, and Chinese-Finnish Wenbing Wang (in Finnish).

Divorces of the elderly are a rising phenomenon in Japan. The topic is addressed with warmth in Kobayashi Shotaro’s comedy drama Only the Cat Knows (Hatsukoi: Otosan, Chibi ga Inaku Narimashita, 2019). A couple that has been married for over 50 years is hardly communicating anymore, and when their cat goes missing, a crisis emerges that threatens to end their union for good.

Korean drama Way Back Home (Bimilui jeongwon, 2019) concerns dealing with trauma and how it impacts an individual’s identity and intimate relationships. The suppressed memory of a rape that happened ten years ago resurfaces into Jeong-won’s life when her assailant is arrested. She must process the experience and re-build the foundation of her life. Her journey is depicted with optimism in female director Park Sun-joo’s debut film.

Searching for a connection with loved ones are also the characters in the Taiwanese family drama Synapses (Nage wo zui qin’ai de mosheng ren, 2019). The members of the Zhang family struggle in dealing with an adult daughter’s return from prison and the elderly father’s progressing Alzheimer’s disease as well as adapting into the new dynamics and contradictory expectations. Chang Tso-chi’s film is a nuanced study on a family in the best tradition of Taiwanese cinema. Traditional Chinese theater, which is featured as one element in the film’s storyline, is highlighted after Saturday night’s screening with a performance by and discussion with a National Academy of Chinese Theatre Arts graduate Elias Edström.

East Asian theater traditions are also the theme of a selection of Asian cinema classics hosted by the National Audiovisual Institute in collaboration with Helsinki Cine Aasia. The three classic films screened at Kino Regina during the festival are Kurosawa Akira’s The Men Who Tread on the Tiger’s Tail (Tora no o wo fumu otokotachi, 1945), Ichikawa Kon’s An Actor’s Revenge (Yukinojo henge, 1963) and Chen Kaige’s Farewell My Concubine (Ba wang bie ji, 1993).